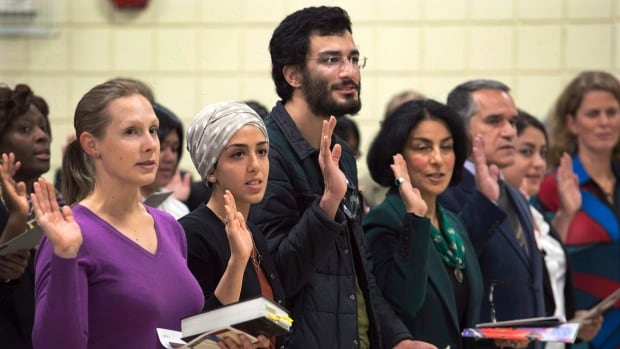 The Korean who owns the pharmacy, the Portuguese building contractor, the Indian who started an accountancy practice — no matter what their place of birth, they're creating jobs, for themselves and for others, Statistics Canada has found in a new study.

By the time they'd been in Canada nine years, about 5.3 per cent of immigrants owned a private company, meaning they formed new businesses more quickly than the Canadian-born population, where the rate is 4.8 per cent.

Another 19.6 per cent of immigrants were unincorporated self-employed persons, compared with 16.1 per cent for the Canadian-born group.

Longer-term immigrants, who had been in Canada from 10 to 30 years, also appeared to be more entrepreneurial than the Canadian-born, Statistics Canada said.

It found 5.8 per cent of longer-term immigrant tax-filers were owners of private incorporated companies.

The federal agency found private incorporated firms owned by immigrants tended to be smaller than those owned by their Canadian-born counterparts.

In 2010, private incorporated firms owned by longer-term immigrants employed, on average, about four employees, compared to about seven employees in private businesses owned by a Canadian-born group.

While immigrants are often perceived to be more entrepreneurial than the Canadian-born population, there have not been good studies to illustrate the business creation and job-creation role they play, according to authors of the study, David Green, Huju Liu, Yuri Ostrovsky and Garnett Picot.

"The extent to which immigrants contribute to economic growth is one of the central questions in immigration research," they wrote in an analysis of the data.

In the first two years after they arrive in Canada, immigrant's business creation level is quite low, the study shows.

"This could occur because immigrants acquire knowledge of business networks, sources of financing and business opportunities, and possibly because their wealth and assets increase over time," the authors said.

"It may also be that some immigrants are 'pushed' into self-employment because of difficulties finding an appropriate paid job."

However, by the time they've been in Canada six years, they are creating businesses at a more rapid pace than the Canadian-born.

Immigrants who came under the business class program were the most likely to have established a company, with 15 per cent of the principal applicants owning a private incorporated business. That compares with 6.2 per cent of those who came in the economic class and 4.3 per cent of those in the family class.

More than half the businesses were in professional, scientific and technical services; retail; accommodation and food services; transportation and warehousing; and construction.

"It is possible that the barriers to entry related to these industries, including capital costs, are lower here than in other industries, such as manufacturing, according to Statistics Canada director of economic analysis Danny Leung.

Of the self-employed immigrants, more than one third were in real estate or in rental and leasing.